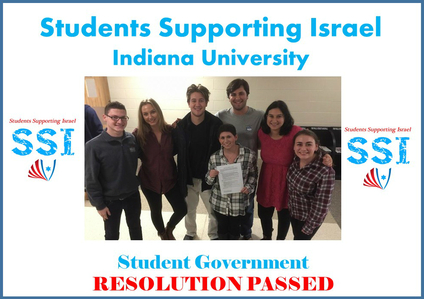 Students Supporting Israel at Indiana University has successfully passed a resolution in its student government! The resolution adopts the United States' State Department definition of antisemitism against Jewish people, and speaks against the BDS movement.

The resolution states that:
"The Indiana University Student Association adopts the definition of anti-Semitism as stated above as well as the State Department’s understanding of Anti-Semitism relative to Israel"

"The Indiana University Student Association recognizes that the Jewish people, like all peoples, have a collective right to self-determination, and considers attempts to undermine these rights, including the global BDS Movement against Israel, to be a form of bigotry"

SSI Indiana Vice President Ryan Fidell reflected on the resolution:
"Tonight was triumphant. We are so proud of everyone who played a great role within the organization, and fought with us within student government. As president Jesse Nejberger, and myself as Vice President, leaving this semester, it is something wonderful to see this success."

SSI Indiana Board Member Rebekah Molasky said:
"This resolution makes strides for our college campus as a whole and our Jewish community. It also facilitates healthy debate and distinguishes racist dialogue from genuine criticisms of Israel on a campus-wide level. By passing this resolution, our student congress accepted the State Department's definition of anti-Semitism including that of the 3D's towards Israel: demonization, delegitimization, and double standard. We are proud that on a campus with such a large Jewish population our congressmen are willing to be allies to the Jewish community."

SSI National President Ilan Sinelnikov congratulated the students:
"I am proud to see how the SSI'ers at Indiana University passed another successful resolution on campus. The students deserve a lot of credit as they worked so hard this semester to make it happen. This is the fifth resolution that SSI chapters are passing, and by doing so we show once again the power of a strong Pro Israel movement. No more do we find ourselves on the defense; it is time to take initiative, be proactive and make a change on our campuses."

Congratulations to SSI Indiana, and we want to thank all the partners- StandwithUs and Indiana Hillel, who helped the students on campus in drafting the resolution.