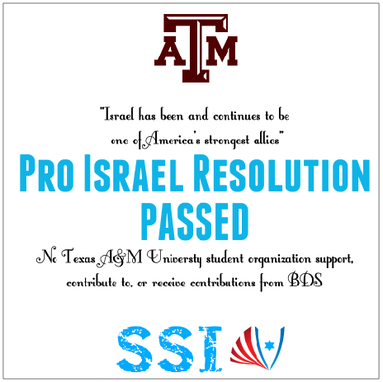 The bill proposed by Senator Jacob Powell from the College of Engineering and by Senator Olivia Krog from the off campus caucus was supported by the Aggie Students Supporting Israel chapter on campus. The bill passed with a majority vote of 38 for, 6 against and 4 abstentions at 9:37 pm central time on March 7, 2018.
This is the first pro Israel bill to pass in student senate across the country for the current academic year, and the second bill overall to pass in the Texas A&M student senate following a bill passed on April 22, 2015 led by the members of Aggie Students Supporting Israel.

The bill main clauses state:
“Israel has been and continues to be one of America’s strongest allies”

“While the Student Senate will respect the right of all students to freedom of speech, it recommends that no Texas A&M University student organization support, contribute to, or receive contributions from BDS”

Author of the bill Jacob Powell said “This bill is a huge step forward toward combating anti-Semitism and strengthening the relationship between Israel and Texas A&M. As seniors in high school start to make decisions on what college to come to, I hope that they will see us as a University that is not just reactive, but proactive in stopping anti-Semitism and BDS having a presence on campus. I am proud to have helped spear-head legislation denouncing BDS”.

Olivia Krog coauthor of the bill added: I believe this resolution is important for Texas A&M because it reinforces the values that all Aggies, including our Israeli students, stand for. As our allies and partners, Israelis receive our support at every turn and it was wonderful to see the leadership of the Texas A&M student body come together in Senate tonight as the voice of those on our campus often unheard. We advocate for all Aggies and have no tolerance for anti-Semitism. Tonight the Texas A&M Student Senate stood in alignment with the values of our nation, our state, and our university by putting respect for others and integrity above all else.

Elad Dermer the President of Aggie Students Supporting Israel concluded: I am proud of Senators Powell and Krog for proposing such a bill, this is an outstanding proactive move and in days like this when we hear of BDS passing across the country, we are proud to stand strong with Israel. This is only the beginning of our accomplishments, Am Israel Chai.

Students Supporting Israel would like to thank our national partner StandwithUs and Max Samarov for helping to pass such a bill, together with StandwithUs similar bills were passed by our SSI chapters in the past at Indiana, Capital, Kent State, and Chapman University. Together we keep on winning our fights against BDS on campus in a proactive way.

Students Supporting Israel once again congratulates the outstanding legislation passed at Texas A&M University and thanks Senator Powell and Senator Krog for their leadership. Students Supporting Israel encourages other students across the country to follow the proactive steps at Texas A&M University bringing such legislation to their campuses across the country, pushing the BDS movement farther away from our campuses and supporting the Jewish and democratic State of Israel.