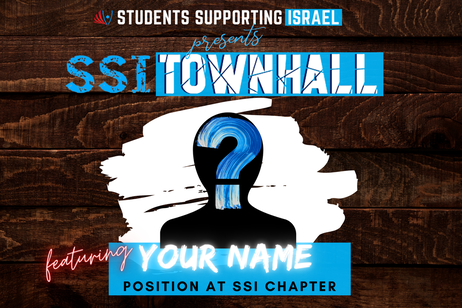 The SSI Townhall Series was created to honor and celebrate SSI students and alumni making invaluable contributions for the betterment of the pro-Israel community. SSI's students are known for their leadership and grassroots methodology, but what some may not realize is the background of many of these students, and WHY they support Israel. SSI believes it’s incredibly important to recognize those who embody grassroots humility while expressing their drive as a warrior on campus by encouraging pro-Israel advocacy among others.

SSI Nationals will consider the following: a nominee’s success in making a difference in the community; active involvement on campus; and a nominee’s characteristics including, honor, integrity, background, and drive.

Qualified nominees must be actively, or formerly involved in Students Supporting Israel on their campus.

Nominees will be featured on an SSI Townhall, with a Q&A session to be featured in on our social media, Youtube channel, and our weekly newsletter!

***Self Nominations are accepted AND encouraged!***