Students Supporting Israel would like to congratulate the Wake Forest University student
government for passing a resolution in support of the campus' Jewish community and Israel.

The first attempt to pass the bill at Wake Forest was done in April of 2018 by members of Students Supporting Israel. This is the first pro Israel bill to pass in student senate across the country for the current academic year, and the second bill overall to pass in support of the Jewish community this fall (University of Houston). This is the 10th pro Israel bill to pass that was written and supported by the members of the Students Supporting Israel chapters nation wide.

The bill main clauses state:
"Denying the Jewish people their right to self-determination, and denying Israel the right to exist"

"The Student Government recognizes that some, but not all, criticisms of and attacks on the State of Israel can be anti-Semitic dog-whistles and condemns such criticisms and attacks;"

Philip Yurchenko the Vice President of SSI at Wake Forest and an alum of the Club Z program said "We are extremely excited that all of our hard work has paid off. This resolution has made a powerful impact in the Wake Forest community. The passing of the legislation shows the strength of Wake’s community supporting the Jewish people and the Jewish State of Israel. We are proud to see Wake Forest simultaneously support free speech and draw a clear line against anti-Semitism when it comes to Israel. It is important to talk about anti-Semitism and other forms of bigotry – education and dialogue is the only way to expose and correct it. Discussing Israel is often perceived as controversial, but we applaud Hillel and student government for not shying away from this difficult topic. Working with student government has been a rewarding process. We are very fortunate to have representatives that care about protecting minority communities on campus and are in touch with current issues".

Students Supporting Israel would like to thank our partners at Wake Forest Hillel and high school program Club Z for helping to pass such a bill, together with Hillel and Club Z similar bills were passed by our SSI chapters in the past at Indiana, Capital, Kent State, and Chapman University. Together we keep on winning our fights against BDS on campus in a proactive way.

Students Supporting Israel once again congratulates the outstanding legislation passed at Wake Forest University and thanks the student leaders and our partners for their hard work. Students Supporting Israel encourages other students across the country to follow the proactive steps at Wake Forest University bringing such legislation to their campuses across the country, pushing the BDS movement farther away from our campuses and supporting the Jewish and democratic State of Israel. 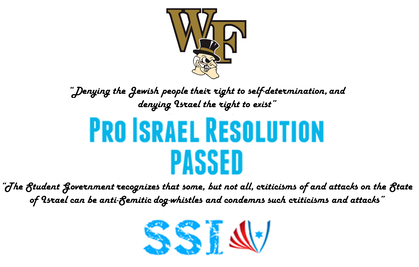