Bellow you can find the English Translation of the article.
Read the Original Article in Hebrew Here. 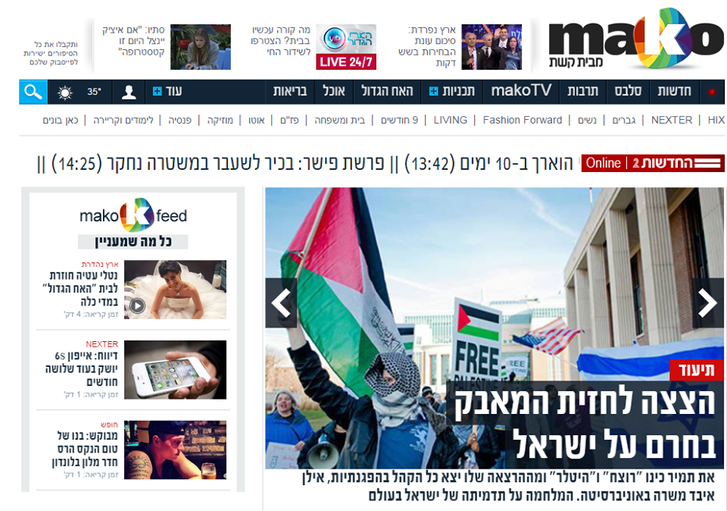 The boycott movement against Israel is gaining momentum around the world, and one of its main focuses are college campuses. On campus lectures are disturbed by pro-Palestinian demonstrators and heated debates are held with members of pro Israel organizations. Pro Israel students have documented some of the incidents and provide a glimpse of one of the active fronts in the war on Israel's standing.

Last July, during a lecture by Israeli officers on a campus in California, the hall erupted when pro-Palestinian activists with banners started to interrupt speakers and chant against Israel. "War criminals not welcome here, murderers. You kill women and children", they shouted. "We do not want your propaganda and your lies, you break rules - you're like Hitler".

On another California campus in April, an Israeli speaker tried to talk to the Palestinians protesters. "We came all the way from Israel, we want to talk and hear you - please, let's talk," they said to the young Palestinian man covering his face. He refused to talk to them directly and continued to read from a description of war crimes committed by Israel. "These acts of terror, liberated Palestine", he exclaimed.

Tamir Oren, director of leadership programming  for the Non Profit Israel educational group Stand With Us, was one of the speakers at that event. "We are not interested in them, and our answers were not interested," he says. "We entered the room, I started talking and they were waiting. I told them my name and where I am from. Once I started to tell my own story, they started shouting at me and began to read the names of Palestinian children who were killed and accused me personally of their deaths".

Tamir stresses that not all members of the Palestinian organization engaged in violence and cursing. While some left after the disruption, there were also those who listened. "Three students came to us from Iraq, who were initially part of those who shouted and cursed. They apologized and said that we changed their perception. With one of them, Mohammed, I am still in touch and we have many discussions."

Last February at Rice University,  pro-Palestinian activists disrupted during the Q&A portion of an Israeli reserve soldier's presentation. "We came in peace to engage in dialogue", the Israelis tried to persuade them to stay. "We came from the other side of the world, the two sides have peace and you are welcome to stay".

Tamir also experienced a similar case when all student protestors left the lecture hall. "While we were talking, they just started to leave" he said. "We knew it would happen because they posted on a Facebook group before. They just stood and we tried to tell them to sit, listen and engage in dialogue. It really hurts effort to hold a conversion.  We are there to open dialogue."

"We have shown that the community will not be silent"

Ilan Sinelnikov, a business administration and marketing major at the University of Minnesota, felt the lash of the BDS movement when he wanted to be on the student government committee that oversaw student service fees. "After they told me I was hired, a BDS student activist found out I was heading a pro-Israel organization on campus," he says. "He started sending e-mails to other committee members in which he called me a “pro war activist” and compared Students Supporting Israel to the Ku Klux Klan."

After the emails made their rounds, it was decided to cancel the appointment of Sinelnikov to the fee committee. "Because of what happened, Naor Biton, another Israeli student, and I decided to organize and establish a student organization, called Students Supporting Israel (SSI), and establish pro-Israel groups around North America" he explains. "The groups will be organized to collaborate the fight against BDS".

Lea Lara, a student at the University of Georgia in the US, also spoke of the success the pro-Israel organizations had on campus. "We set up a group that collaborated with the organization (Students Supporting Israel)" she says. "We were able to expand program funding for foreign students from Israel and the proposal was unanimously accepted in student government. We have shown how the pro-Israel community will not be silent and will stand up. "

Not only is struggle happening on US college campuses - Ido Cohem, Foreign Relations Manager at Stand With Us, argues that this trend is worsening. According to him BDS organizations are working on campuses around the world to create fear and hatred and to prevent any possibility of dialogue.

"We heard discussions on campus, distributed by BDS, that we want to convert all the Palestinians," says Cohen. "Israel wants to kill everyone in black, we want to create separations in education and health. They are trying to show that it's something that institutional".

Cohen says that many Jewish students are afraid to wear a kippah or a Star of David, mainly during " Israeli apartheid Week ", organized by the BDS every year on campuses around the world. "This event really divides campuses into two" says Cohen. "Violence and hatred only increases."