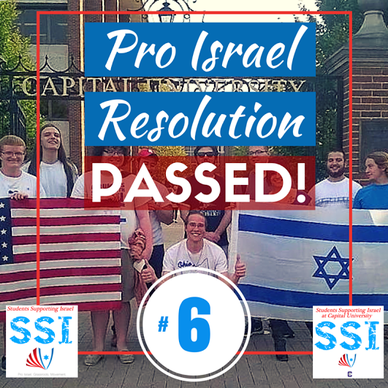 Students Supporting Israel (SSI) National congratulates the chapter of SSI at Capital University Ohio for passing a resolution in support of the Jewish people and the Jewish and democratic State of Israel in the Student Senate’s 4th General Assembly. In recent months members of Students Supporting Israel at Capital University have been working closely with the university’s Student Government and Student Senate in order to pass a resolution condemning anti-Semitism and the delegitimization of the State of Israel. SSI Capital became the 6th SSI chapter to pass a resolution in its student body, and the first one to do so in the spring of 2016 across North America, following the victory against BDS by the SSI members at the University of Minnesota earlier this semester.

The resolution states the following:
“SECTION II: WHEREAS the United States Department of State outlines the following as: … B. Using the symbols and images associated with classic anti-Semitism to characterize Israel or Israelis.
1. Drawing comparisons of contemporary Israeli policy to that of the Nazis.
2. Blaming Israel for all inter-religious or political tensions.
3. Denying the Jewish people their right to self-determination, and denying Israel the right to exist… contemporary examples of anti-Semitism”.

SSI Capital University President Austin Reid reflected: “What is especially amazing is that this resolution was passed unanimously, and not even a word of opposition was raised against it. Capital is the first university in Ohio to pass such a resolution, and what is even more remarkable is that it was done on a campus without any significant Jewish presence. Capital is in fact one of the nation's largest and oldest Lutheran universities, and this resolution proves that we can fight anti-Semitism and anti-Israel sentiments anywhere across the country.”

The achievement of SSI Capital in the student government follows five pro-Israel resolutions that were passed by SSI chapters across the country, the last resolution passed by SSI at Indiana, and following three victories defeating BDS campaigns. SSI is committed to be pro-active on the grassroots level and inside student governments to take initiatives, defeat BDS, and promote Israel on American college campuses.