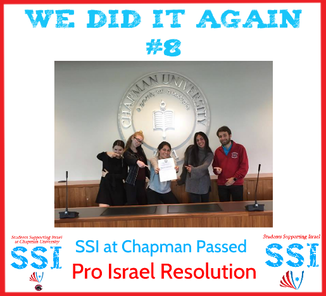 Students Supporting Israel (SSI) National congratulates the chapter of SSI at Chapman University California for passing a resolution in support of the Jewish people and the Jewish and democratic State of Israel in the Student Senate’s General Assembly with a vote of 13 for, 0 against, 2 abstained.

SSI Chapman Co-President and Founder Nicole Newman said: "We are very proud that we were able to pass this bill, this is a victory for the Jewish people and for the State of Israel."

SSI Chapman Co-Founder Leehe Reihanian said: "SSI at Chapman has been working very hard to create a voice for Israel and I am so proud that we are finally being heard. This is not only a success for our group, but for all the Chapman community."