“Here in Buenos Aires our SSI, at the most important University in Argentina, decided that we have to do something with the anti-Zionism that happens on the University. So this week we had a meet with the president of the Zionist Organization from Argentina to present SSI and also we wanted University of Buenos Aires to adopt the IHRA definition of antisemitism. The meeting was excellent and we planned to meet also with the Wiesenthal Center for this. Today, ONLY ONE DAY LATER, the UBA adopted the IHRA definition. It's really incredible, we have the power to make a change.”
​
University of Buenos Aires joins Argentine University of Cuyo as the second University in Argentina to adopt the IHRA definition on an institutional level. UBA succeeds Arizona State University as the most recent SSI chapter to pass the IHRA definition.
Students Supporting Israel would like to congratulate our chapter in Argentina. We are so proud of the rapid determination, and effort put forth by one of our newest additions to the SSI family. SSI at UBA has shown its leadership in the global fight against anti-Semitism by adopting the IHRA working definition. We applaud this notion, and encourage other chapters, and non-chapters to emulate the initiative led by UBA to stop antisemitism once and for all.
Antisemitism is no exception to discrimination and hate, and SSI students are working relentlessly to obliterate history’s oldest form of hate.
The official resolution states:
​
The Superior Council of the University of Buenos Aires resolves:
Article 1 — The practical and legally non-binding definition of “anti-Semitism” approved by the International Alliance for the Remembrance of the Holocaust (IHRA) on May 26, 2016, the text of which readsArticle 2 — Thank the Simon Wiesenthal Center — Latin America for its activity in pursuit of pluralism and the defense of human rights.
Article 3 — Form. 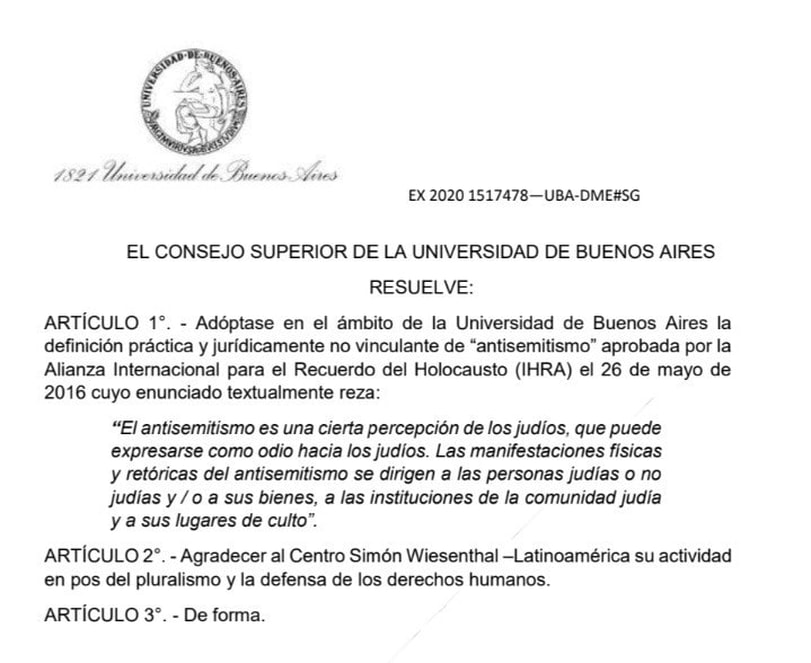