The referendum won in a 58% vote, with a victorious campaign led by the Jewish majority on campus against SJP's attempt to re-define antisemitism for the UMN Jewish community. UMN student government representative and SSI at UMN President, Oren Rosenberg's statement upon the passing of this campus-wide initiative is as follows: 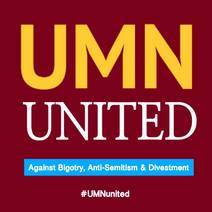 "As they did on March 8th when divestment was first stricken from the MSA Forum agenda, MSA members again wisely voted to reject singling out Israel and oppose the BDS movement, which marginalizes members of the Jewish and pro-Israel communities, and makes students feel unsafe."

"By voting as they did both on the amendment which UMN United brought forward, and on the amended resolution, MSA decisively agreed that subjecting Israel to demonization, delegitimization, and double standards is wrong and divisive. UMN United is the student led coalition that brought together diverse communities at the University of Minnesota in opposition to the divisive UMN Divest campaign." We are extremely proud of the students, and the entire UMN United community for their victory tonight. Jewish and pro-Israel students showed extraordinary results in fighting for the moral and intellectual integrity of the university since this measure was introduced. They rallied an impressive campaign over several months to urge their peers to vote against several divestment resolutions which targeted Israel. Students effectively engaged with campus allies, met with faculty and university administrators, and educated MSA members about the issue.

Leeore Levinstein, incoming SSI President, said: “Tonight we defeated BDS for the second time in less than two months. I am proud of our student government, which acknowledged that there are steps we can take to make progress toward a better world, toward advocating for human rights and social responsibility in ways that don’t unfairly place blame on one country, marginalize students and hurt communities. We make progress with unity, not division."

Sami Rahamim, SSI President, said: “I hope campuses around the country will take notice of all that the UMN United campaign has achieved over the past two months. Student leaders spoke up for the inclusion of all communities on campus, including Jewish students.”

"SSI Movement will not allow divisive campaigns to tear apart our campus community or to isolate Jewish students because of their religious or ethnic identities, or because they support the Jewish State of Israel."

​"We will continue to work with students to create a community that supports peace and honest dialogue and that works to make our campus, our community, and our Jewish homeland safer and more peaceful."

STUDENTS SUPPORTING ISRAEL NATIONAL, Minnesota Hillel and JCRC, APPLAUD MINNESOTA STUDENT ASSOCIATION VOTE AGAINST SINGLING OUT ISRAEL FOR DIVESTMENT, THE VOTE REPRESENTS A CLEAR DEFEAT OF THE BOYCOTT, DIVESTMENT, AND SANCTIONS MOVEMENT AT THE UNIVERSITY OF MINNESOTA

UMN United Statement:
Tonight, the Minnesota Student Association (MSA) declared loud and clear that it will not allow minority groups to be marginalized by one-sided resolutions.
We are proud of the student leaders who spoke out against the divisive divestment campaign, and in favor of a truly inclusive campus. Over the course of two and a half hours of various stages of debate, the true aims of the divestment resolution became abundantly clear.
MSA heard the UMN Divest campaign and its supporters state that their goal was a resolution calling for socially responsible investments and financial transparency without aiming to target or marginalize any communities on campus. So that’s exactly what we gave them.
We proposed an amendment to the divestment resolution removing references to specific companies, countries, and regions. The amendments to our resolution were adopted by a vote of 37-30 and the resolution with our amendments passed 45-18-7.
We are fully in support of financial transparency and socially responsible investments for our University, but we refuse to endorse a resolution with ties to a global movement (BDS) that advocates for the destruction of Israel.
Unfortunately, the leaders of UMN Divest adamantly rejected our proposed amendment.
If socially responsible investment is not their goal, then what are they truly trying to accomplish? We’ve said all along that divestment targeting Israel is extremely divisive, a fact that was painstakingly evident at tonight’s Forum.
If SJP put as much effort into working toward collaborative, progressive change as they put into their Divestment campaign, the U of M could foster a positive change for Israelis and Palestinians alike.
​We thank each and every person who contributed to the UMN campaign. We thank you for the conversations and dialogue over difficult topics. We open the door for collaboration and unity on campus into the future.